Slows down enemies with his attacks.

Slides to get a speed boost.

Throw
Fuzzy is one of the playable characters in Zooba: Battle Royale.

He is described in-game as the 'Frosty Strafer'. Not only is he a fast swimmer, but he can also slide on the ground for a speed boost and even slow enemies down with his attacks! His active has a short cool down, but not short enough in many players opinions, allowing him to get trapped between Jade and a hard place. So if you are playing Fuzzy, try to get into a bush before you stop!  Whenever you kill someone with him he says bye bye or giggles, which means he's legally a psycho.

Fuzzy wanted to be like all the other characters and over time he developed a crazy mind and became a psycho. He wanted to fight all the other animals. He developed a love for slowly watching them suffer. He makes them die slow by making his enemies slow. He is the deadly Frosty Strafer. He became crazy and he loved it. Now he is depressed.

How to unlock?[edit | edit source] 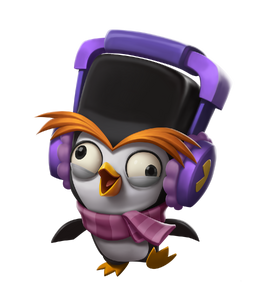 Retrieved from "https://zooba.fandom.com/wiki/Fuzzy?oldid=4531"
Community content is available under CC-BY-SA unless otherwise noted.